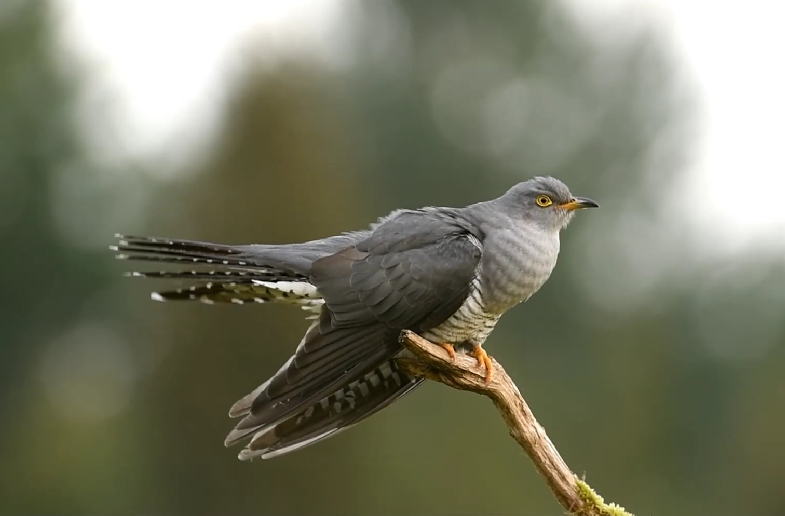 On a recent brilliant sunny day, I was riding our pony Salix, at speed, up the committee fields to visit the cattle and sheep littered in the fields at the top of the farm; the phrase ‘in May, I sing all day’ came to mind. The road at the top of the hill and the sky above were quiet because we were already in ‘lockdown’. Maybe part of the reason these words came into my mind was that this silence matched the quiet days of my childhood. For me, the words are from a time when the world had less noise and the rhyme from which they derive is part of my primary-school lore:

It is about the cuckoo. A story of the year from the perspective of a bird, but it also describes what we hear.

What the rhyme tells us about the call of the cuckoo matches what I observed as a child and the understanding I had then of the cuckoo’s life. I knew they began arriving from their summer haunts, south of the Sahara, sometime in mid-April, and you hear just a few calls. The onomatopoeic cuckoo call we all know and love, the descending minor third, is the call of the male. In May, they are vying for mates and defining their space, so they sing a lot. The females make a trickling sound which is less familiar.

I understood that in June, the adults leave. They can depart earlier than most migrant birds because they don’t need to stay to rear their young; they manipulate other birds do it for them. This means that in June, the newly grown young males are making their first attempts at their call and doing it without parental tuition. The interval they sing is different from that of their fathers; it is closer than the minor third from earlier in the year, so it appears that the cuckoo has changed his tune.

July marks the departure of the youngsters and there are fewer and fewer calls. By the start of August, even though cuckoos are summer birds in Britain and we feel we are still in high summer, virtually all the cuckoos have left. Some of my understanding I now know is true; some may not be. Despite research, I have found no certain reason for the June change of tune.

I could count on my fingers and possibly toes the number of times I have seen a cuckoo in my outdoor life. But the number of cuckoo calls I have heard in my life is countless. In my childhood, the days of May were full of it. The memory prompted by the words of the rhyme when I was riding the other day was of lying in the sun on the grass through long hot days with the continuous sound of cuckoo calls from all points of the compass. I recall trying to work out how many I was hearing, judging how close or far away the birds were. Now, I wonder how far the call travels. Knowing, I could have calculated how many male cuckoos we had on our farm and in the acres around our school playing field. Without doubt, there were a dozen or so in both West Bexington and Litton Cheney where I went to school. Now, I think about the children presently at the school and my little great-niece and great-nephew living just across the road from the farm. None of them are likely to hear any cuckoos. I listen out for the call through early summer and hear it once or twice in a year if I am lucky. Many years I hear none; last year only one was heard in Bexington by the birdwatchers. How many cuckoos are there here and around Litton now?

Our farm offers a better habitat for birds now than it did when my parents were farming here back in the sixties and seventies. There is a larger area of grassland and more scrub scattered in it; there are new hedges and the old ones are thicker. Overall, there are more trees. The neighbouring arable land at Labour-in-Vain is part of our farm now, so it is organic, with the resulting improvement in soil fauna. So the foster parents have plenty of nesting sites and plenty of invertebrates to feed the youngsters. The adult cuckoos too, recovering from their journey, have lots to eat.

So why are there so many fewer? At what stage of their life are they struggling? During migration? Or does their arrival here no longer match the nesting times of the birds they parasitise, perhaps as the climate changes? Is there anything we can do?

The altering pattern of species distribution over my lifetime makes getting older interesting. The brash early-flowering umbellifer, Alexanders, was a rare curiosity when we first saw it back in the late sixties. Now it grows on field and road edges all around here. Fleabane, which covers the land at Cogden, was previously familiar to me only in a few damp corners. I remember in the 1960s seeing the first sleek collared doves, so much smaller and smarter than their cousins, the woodpigeons, and our excitement as we found they were breeding. I recall my father telling me he’d heard a cetti’s warbler in a particular thicket and stayed to see it, the first he’d ever seen. They too can still be found in that same thicket most years, but there are now usually several breeding pairs on the farm; last year, there were thirteen singing males through the season at Cogden. So there are gains as well as losses and we continue to look to the future, both excited and fearful but always fascinated.

Thanks to Mike Morse and Alan Barrett for specific numbers of birds.