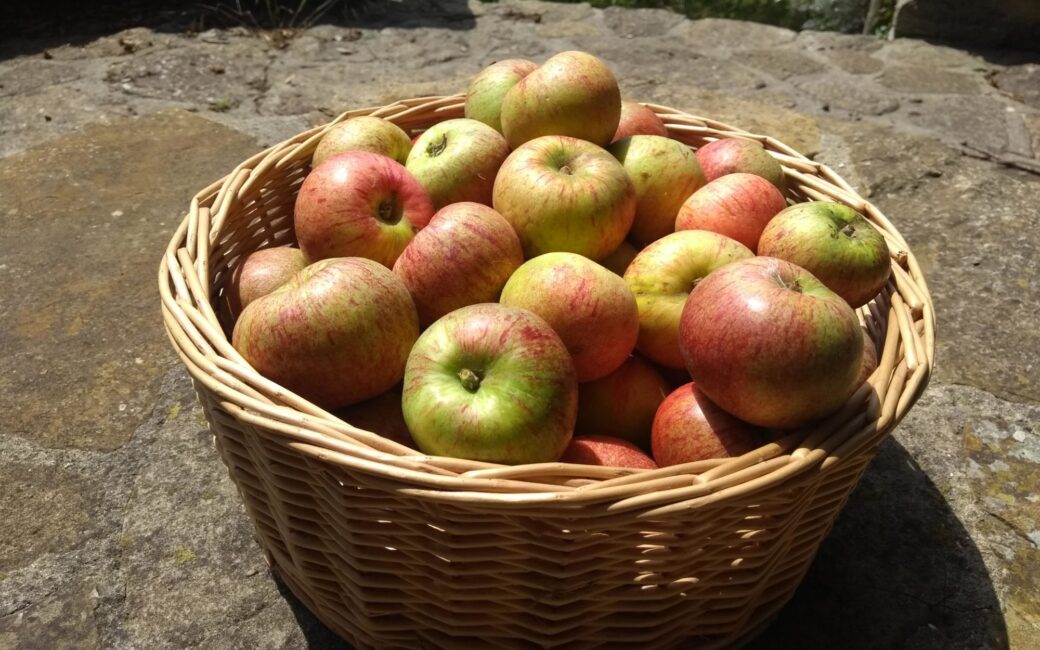 When we first came here in 1960, my father planted trees into a windswept landscape. He planted them to protect the gardens from wind and salt spray. In the places which would in the future be sheltered he then put apple trees. As the years went by, they became productive and, for as long as I can remember, we have had as many apples as we can eat from the end of July through to at least February.

My parents never planned these to be grown for sale. Their first interest when they started growing fruit and vegetables was making sure that they could feed their family on good fresh food. Before we were told to eat ‘five a day’ we knew ‘an apple a day keeps the doctor away.’ As each of the six children in the family in turn became old enough to eat apples, he or she routinely had one at bedtime. For much of the year, we ate several at other times of the day as well, either found beneath the trees or picked from them, or taken from store through the late autumn and winter.

The sequence of apples we eat starts with a variety called Beauty of Bath. We used to go to Sidmouth Folk Week for a day at the very end of July and we always took a basket of them. They are now redolent of the pleasure of being on the Georgian sea-front listening to buskers. With climate change, they are coming earlier and this year I ate my first one quite early in June and was able to take a basketful to the Millennium Garden for our own Bridport Folk Festival. The next to ripen are Katy, bigger apples, more modern, fresh and crispy but without the subtle flavour, then Lady Sudely and soon the very best of the earlies, Ellison’s Orange, with its light texture, rich wine flavour and juice on your fingers. And so it goes on, through Pitmaston Pineapple to the start of the Russets. I feel like writing a list of the names and qualities of the apples we eat though the season. For each of the really familiar ones, I can tell its identity from the feel of the skin, its shape, the tenderness of the flesh, how juicy it is, by which diseases and pests it is prone to and, most of all, by the flavour. Not many years ago, I realised that getting the greatest pleasure out of apples is a learned skill. People who have only eaten a few commercial varieties can’t always tell different types apart. I offered someone a bit of one of my favourites, expecting a response which fitted the great pleasure it gave me. The response did not come. It was not because the apple didn’t taste good, it was because it was less sweet than she was accustomed to and the rich but subtle flavour I love did not make it through my friend’s expectations; she only noticed the tartness.

We now have apples in the Labour-in-Vain Orchard as well as at home. Regular readers and friends will know that we took on the tenancy of our neighbouring National Trust farm 20-odd years ago. One of the pleasures it has given us is rebuilding its ancient orchard. I knew there was one there, lost behind some sallow scrub near the old farm mill-pond because, as a child, one day I’d peeped through blackthorn and brambles and seen the red and yellow of hidden fruit. I cannot now remember how I came to be there and I fear it must have been illicit. I remembered this when we started there and was pleased to find that the tenants who had come in after my childhood neighbours left had done some work on it. The orchard was clear enough to get into it without fighting through the brambles I had seen years before. These farmers were immensely busy people, with a mixed farm and a sheep pregnancy scanning business as well, but still they managed to clear, plant bulbs and put in a couple of new trees there and they must have used it from time to time for grazing small numbers of sheep. We found a couple of pear trees, some old cider apples, a good early eater and an excellent keeping cooker. With help from the Defra Countryside Stewardship Scheme, we got the old trees pruned and planted more, extending the orchard into the corner of the next field. We chose to put in a big range of different dessert apples, all keepers chosen for their flavour, and a few damsons, pears and quinces. The emphasis was on food to use through the winter rather than fruit to pick and eat in passing, which is how we use much of the fruit on the original market garden.

By the nature of things, trees grow and we now have some large apple trees bearing well. As my parents half a century ago, so our main interest now is in supplying ourselves and the people around us with good food. We do not have enough to sell quantities of apples and we do not manage them for productivity. We are not trying to sell them, however in August this year I started to put out one or two varieties in our Friday morning shop for the few people who are interested in building up their apple-recognition muscles and I hope I can continue it through to March. Unfortunately, we do not have all the names of the ones my parents planted and we don’t have the names of the old ones in the Labour-in-Vain orchard. I mean to get to one of the local apple days such as the one at Melplash or Grove’s Nursery to ask experts for help in recognising our unknowns. Sadly, the farm tends to take precedence and they fall at a busy time, with cultivation and drilling to be done. This year I hope we’ll make it and come home with the definitive list!