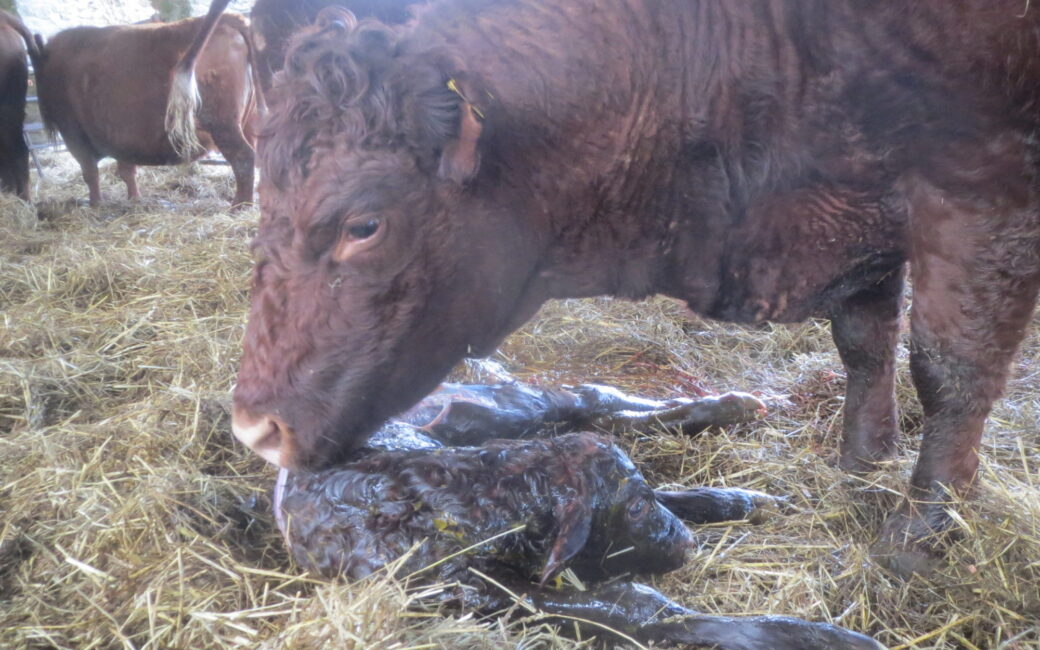 Our cows’ main job is to be mothers, and they are very good at it. We can recognise the start of each cow’s mothering by hearing her talk to her young one. She will start when she is beginning labour and uses her special mother’s voice only for the next day or two. As human beings we raise the pitch of our voice when we speak to our babies. Cows lower theirs, making a very particular sound, one we never hear at any other time. If we hear the characteristic quiet, brief lowing as we go out in a darkening evening to check the cattle, we know for certain that there will be a calf newly dropped or one about to appear. It’s a mother calling for her little one.

Over most of our calving time the cows are housed beside a path from the market garden to the farmhouse; everyone walks that way whenever they can, not only to enjoy seeing calves fresh in the world and then playing together when they are a few days old but also to notice whether all is well. We know that almost all of the cows will labour and calve by themselves but still we make a point of knowing what is happening most of the time. It is not necessary to attend but it is prudent. However good they are there may be some reason to stay, but whether or not we need to be there, we like to be. There are distinct physical signs when a birth is imminent and also more emotional ones: a cow may be restless, stand apart, maybe take herself to a quiet place. If she is young, her mother or sister may stay with her supporting her privacy. We watch for the signs and teach them to anyone who might be walking the path, asking them to tell us what they see. Thus, we often know which cow will be having her calf next and look out for its arrival.

We like to tell local children if a calf is on its way; they stand quietly where they can see but not disturb the mother. The cows are professionals at this; it is after all their raison d’être and, ignoring us, they get on with their work which is strong and physical. Our work is observation: we check how the calf is lying ready for birth, ensuring that it is diving out, one front foot coming first with the next one just behind it and with a nose to follow, and we check that the cow is feeling active and strong. If all is well, we simply watch. She has chosen where she wants to calve and now will choose her position, turning around, lying down and getting up again in response to the promptings of her labour, eventually working hard, pushing in waves. We watch the calf finding its way into the world, sometimes inch by inch showing a flickering tongue and then a blinking eye, and sometimes in one big whoosh.

Once born they lie for a few moments, head on the straw, becoming familiar with the sensations of their body in its new world. It is as if they are making sure that they are still the entity they were, that their heart is still beating and that they are ready to breathe air, which they have never done before. As moments go by their breath becomes ordered. They blink but show no sign of seeing. Soon they blearily raise their head and shake it, wet ears slapping from side to side, and then look around, not yet seeing clearly. They stay as they are for a while, then re-arrange their legs, taking them from a collapsed tangle to an organised fold beneath their body, now sitting neatly. Now they seem to be taking in what is before their eyes as they look about, turning towards their mother and away again. Within minutes they are ready for the next stage: trying to stand, back legs first then front. However, they’re still developing their co-ordination and rarely manage first time. They start with getting onto their knees, then raise their backsides high and balance in a triangular posture for a moment, hind legs extended, front legs still folded under their shoulders. An inadvertent extra push with the back legs throws them forward and they end up with their faces on the ground, or they push too much from the knees which sends them sideways. Again and again they find themselves in their ungainly version of the ‘downward dog’ yoga posture, and again pitch themselves down. Eventually they balance long enough to lift their front legs fully and are finally held by all four feet, swaying. Their next move is to stagger, preferably forwards, and eventually to the udder, where they will grasp a teat and help themselves to the life-giving colostrum, that first rich milk full of antibodies and precisely the food to satisfy them completely.

All this time, the mother has been doing her bit in this great endeavour. She has been busy making sure the calf is warm and dry, using her rough tongue to clean the sticky wetness from the calf ’s wavy coat, leaving it clean and shining. But a cow is a heavy animal and each lick uses her whole head: often the precarious balance is broken by these loving ministrations and the calf tumbles yet again.

In farming, both in the long past and now, cows are sold with the plaudit, ‘never seen calving’, meaning that they routinely get on with the job without help, doing it as nature intended and in the best way for the farmer. Our cows generally live their whole lives with us but, were we to sell, many of ours could be given that recommendation, although perhaps fewer than deserve it. We so often watch them calving when there is no real need, simply for the joy of seeing the calf slither into its new world, the cow feel the satisfaction of giving birth, and hearing her express it in her quiet mother’s voice.

A big thank you to all the Bridport Times readers who came and chatted with us on the Real Bread Week stall following last month’s article. If you took away a starter and some flour we’d love to hear how your first sourdough loaf has gone.