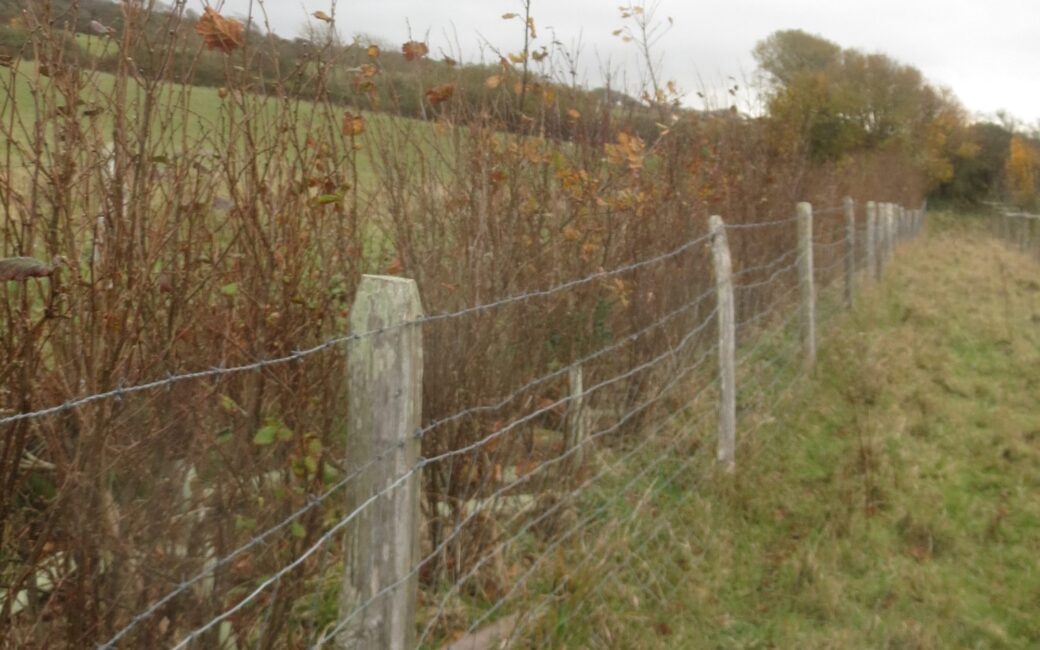 Every year we renovate and mend fences and, from time to time, we need new ones. December can be a good time for doing this as we are no longer busy with other things. The cattle and sheep are fairly stable: in most years the cows are still outdoors, feeding their calves and pregnant again, and the ewes are happily weaned of their lambs and enjoying the attentions of the rams, about two thirds of them pregnant by the start of the month. The wheat and rye is well-established in the arable fields. The winter vegetables have started cropping and the overwintering ones are established, ready to stand the winter. All is well, and we have time to think about the maintenance of the farm before we bring the stock indoors and find ourselves into proper winter routine. This year we have quite a bit of fence-mending to do, and the new fruit trees we are hoping to plant will also need fences as protection from grazing animals. We fear the main difficulty this year will be the continuing dry weather – the first forays into fencing have met a very hard dry layer only about a foot down. We hope for rain so this layer will disappear, allowing us to work easily and well. While farming we see many magical transformations. Most of them are in the world of living things: heavily pregnant ewes yield dancing lambs; the tired summer hedges come alive in autumn with fruit and late-season leaf colours and are full of feeding birds. Another transformation I love is that of shorn fleece to knitting wool then, by knitting or crochet, from yarn to garment. At each stage we plan, we use tools, we use skills. Similarly, putting up a fence creates a new entity from disparate materials. A heap of stakes and straining posts, a couple of rolls of wire, a big handful of staples and a small handful of nails are transformed into a fence, handsomely striding out across the land. Even better than simply a new fence, sometimes we have created a new field, with all the possibilities of new and better management. Often a fence is expressly to safeguard a new hedge, bringing shelter for stock, home for birds and small mammals, microclimates for invertebrates and growing vegetables, and leaf litter for soil fertility. Previously we used tanalised softwood for our fences but now we use only chestnut. When we began replacing old fences, many of which were put in by my parents in the 1960s, the split oak stakes and strainers they had used were, despite some attrition, still strong and sound at the core. We were able to rescue many of them for future use and the rest made excellent firewood. By contrast, the left-over tanalised wood from more recent fences was not useable, firstly because it was no longer solid and secondly because it was still poisonous and we could not even safely burn it. Sadly, it had to go to landfill. So we compromised, using chestnut for the stakes and softwood for the straining posts. Then, twelve years ago, the arsenic was removed from the formulation and the tanalised wood was not poisonous enough to keep at bay the micro-organisms, resulting in many fences in which the strainers rotted at ground level within a few years and snapped. We now use round and riven sweet chestnut throughout and we would use oak if we could. Both are hardwoods, with heart-wood which is naturally resistant to rotting and will last a good quarter-century. The stakes are skilfully produced in traditionally managed coppiced woods which provide employment in the countryside and support a varied flora and fauna. The ones we have at present were grown in Hampshire and supplied to us by the man who cut them. Sadly, these were his last crop: as he explained, ‘…well I’m 70 now and the man who works wi’ me is goin’ on 85 and, well we’re gettin’ tired.’ At that time he hadn’t found anyone to take it on, although the good news is that there now are young people who do want the lifestyle, making a living in a woodland by managing it in the traditional way, producing charcoal, firewood and fencing stakes, and reviving crafts such as green woodworking and chair-making, with all the hard work and pleasures involved. We would love to grow our own wood but, even in the best conditions, it takes many years to establish and start cropping a chestnut or oak coppice and sadly our coastal environment, so good in other ways, does not lend itself to this particular product! The sweet chestnut trees my father, Arthur, planted around 1970 have lived but not thrived. I find it hard to be limited by the past, so, ever hopeful, I put in some more two years ago. They settled well for the first year but the hot, dry summer this year has knocked them back and several died. I do not envisage having any stakes from them for a long while if ever, but we can hope for lighter staves which could be used for Sussex-style hurdles which my brother Chris learned to make last winter. We have triumphed, though, with growing hazel. We were assured that hazel could not manage the salt winds but we already had a few long-established hazels growing in sheltered gullies. Knowing this, some years ago we dared to plant a length of hazel hedge and we have been cropping pea sticks and bean poles for the market garden from it. Seeing this success, we have planted three more hedges which are primarily hazel and oak with a mix of other shrubs and begun to coppice a small patch of old hazel. Maybe, sometime, we will need someone to learn another new skill so that we will have a hazel hurdle-maker on the farm.