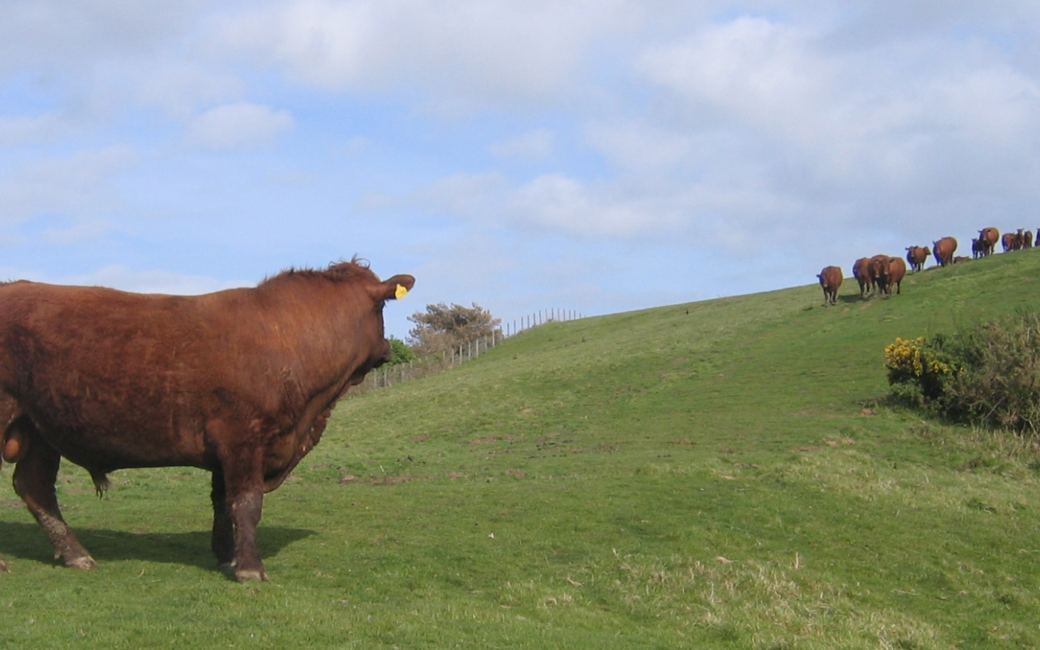 When we took on the conservation grazing land at Cogden in 1995 we changed our herd of mixed  cattle with its wonderful array of colours and shapes to mahogany coloured, deep bodied pedigree Red Ruby Devons. These  hardy animals (also called North Devons) are particularly known for living outside all year round on the wild coast and moors of North Devon and Somerset, but have been local to this part of Dorset too. The oldest worker on our neighbouring farm in Swyre was excited when he first saw our new cattle. He told us his father had Rubies as their milk herd in the 1940s and 50s when the breed was a good dual purpose breed thriving on rough pasture, used for milk and meat. Further back in time, Rubies were also draft animals; now they are primarily used for excellent traditional beef.

We bought our first cows from Lundy Island in the Bristol Channel and from the North of Dartmoor, so they came ready to manage the rigours of their new coastal home. They are small, sure-footed animals and  are calm and friendly. A farmer came to look at some heifers a while ago, his South Devon farm, like ours, hosts the South-West coast path. With his unfenced cliff-top footpaths it was even more important to him than to us that the cows didn’t get into a flap when disturbed. He bought some on the spot!

We like to have the cows close to hand when they are calving for easy supervision, so most calves are born before Easter while the cows are still indoors. We also want them to go out as soon as possible so that the cows can make milk from the nutritious spring grass. To have all the births within this short time the bull joins the cows in early May and leaves in August. For several years our bull has gone to Park Farm, at River Cottage, after he has finished his year’s work with our cows. They too, with so many visitors, want a quiet addition to their herd. Bulls who routinely go to other farms to serve new cows are familiar with being loaded into the trailer and go in cheerfully! When he comes home, there are young steers to keep him company until the time comes round for him to re-join his ladies. As we breed our own replacements we cannot keep a bull for all his life or he would breed with his daughters. Our last bull, Kingcup, went to a farm on the Mendips in 2017 and we now have a young charmer called Prince from Oxfordshire.

We use the word fertility in all sorts of contexts and at different levels. We talk about fertile minds and ideas, about fertile ground. We talk of rich soils and rich environments as being fertile. Whether used as a metaphor or literally fertility is a key concept. On the farm we talk very directly about animal fertility: about our stock’s ability to conceive and carry young.

In October, we look particularly at the fertility of the cows. We work in Mile End, the top field at Cogden where we have a temporary cattle-yard with one of the best views in the county; on level land but with the slope falling to the Chesil and the sweep of the Jurassic coast in both directions, able to see Portland Bill and, on a clear day also Start Point from probably the windiest place on the farm! On a good day, we are working with buzzards and occasionally a peregrine flying below us on the ridge-lift, with the sea bright beneath us and the scent of sweet grass wafting on the gentle breeze up from the pasture, often still jewelled by the purple knapweed and late yellow trefoil even in October. On a bad day, we are sodden by the salt laden-rain driving into us carried by an Atlantic gale. Either way, each cow needs to go through the race for the vet but this is not the main difficulty. The greater tension is the number of cows which are not pregnant.

We note which cow is being checked and pause while we wait for the verdict. ‘6 weeks’ ‘three months’ ‘well in’  – each being a statement of how far the cow is into her pregnancy. Sometimes, though, comes the word ‘empty’.

We do not have a ‘one miss and you’re out’ policy, but nonetheless, it can be a life-or-death moment for a cow when the vet says ‘empty’. Each time we have to decide how we will respond. Why might she not be pregnant? Did she fail to conceive or has she been pregnant but lost the calf? One question is whether this cow has Neospora? Those of you who walk the footpaths will have seen notices which draw your attention to this disease. Caused by a protozoan, it cycles between cattle and dogs. It is undetectable in dogs but their faeces left on the pasture contaminates the grass. A cow eating it and getting infected in early pregnancy will generally abort her calf and may never carry a full pregnancy again. Some will manage most pregnancies in future but from then on her daughters will carry the disease, so they cannot be used for breeding. So the vet takes a blood sample and we wait to hear from the laboratory before we decide her fate.

The end of the year is a time to look at the start of the year; the cycle is continuous and while we make decisions about the cows in the Autumn we are seeing in our mind’s eye the new calves next year as they go out with their mothers in the Spring to discover a whole new world in which to run and play and skip.