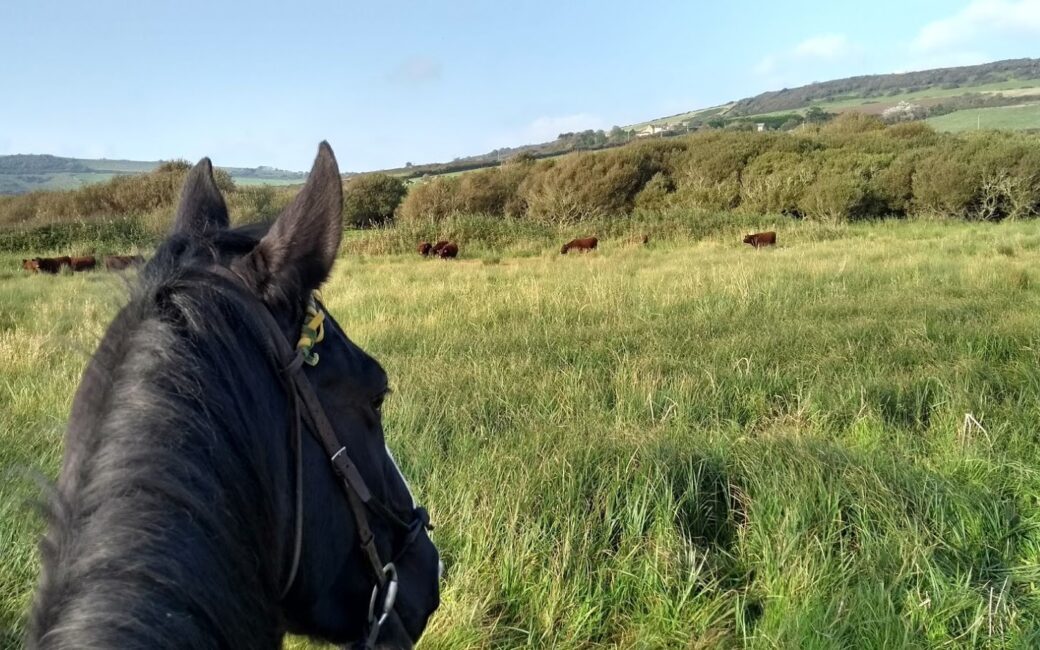 Every day we  check the animals, several different groups in all their different places around the farm. Our fields have thick hedges and scrub patches and the ground has hollows and rises. All this can make it difficult to be sure you have found them all. It can take several scans across the field to be certain you’ve not miscounted. This no longer feels like a chore when combined with a self indulgent pleasure of doing the work on horseback.

There are other ways to move around the farm: we can use a tractor, Landrover, electric quad bike, bicycle, or our legs. But by far and away my favourite way is on horseback. There are other good reasons too. Taking two tonnes of Landrover onto the fields just to check stock would be hard to defend; even in good conditions it causes compaction to the ground that can take years for our trusty earthworms to undo, and in bad conditions the ruts would last for years, not to mention the diesel. The quad is light but still you need to get off it to open and close gates. Bicyles are brilliant for down-hill work but torture going up our slopes in wet conditions or rough vegetation. So it is a toss up between walking from a vehicle left on the road, or taking the time to fetch and tack up a horse. For me it’s no contest!

The horses disturb the animals less than a vehicle, and being significantly further above the ground gives me a commanding view, able to see into the middle of a flock and check all’s well. Going through gates on my young mare Tobie there is no need to dismount at all as she is already adept at helping. After guiding her close to the latch I lean over her shoulder to lift the clapper and grasp the gate and ask her to move. She slips through, turns neatly and pushes the gate closed with her chest. Her mother Marianne prefers to nudge them with her nose! When moving animals we generally have one of us on horseback. Horses can overtake running sheep or cattle – which I’ve failed to do on foot! They can also turn quickly on any ground, an advantage over the quad, and travel on any ground, an advantage over anything with wheels. Tobie sometimes thinks that what she should be doing is chasing the sheep and we occasionally find ourselves with all four feet off the ground as she disagrees with me about slowing down. But horses learn what their job is, and with time and practice she’s turning into a proper farm horse, trotting up and down behind the animals to keep them in the right direction, and even gently nipping at the back of a sheep or cow that’s going too slowly. The sense of partnership is very satisfying.

It’s not all plane sailing: as prey animals, horses can be flighty and easily startled. A pheasant flying out of a hedge, for example, can make Tobie throw up her head in surprise. Or the first time I took Celeste out to see the newly-acquired Jacob sheep: before this, our sheep were either creamy white or black – never both! As we turned a corner Celeste froze, planting her legs immovably into the ground. A big shire horse, she wouldn’t take a single step forward, instead rolling her eyes at these terrifying spotted creatures that had suddenly appeared before her. When one came towards us in curiosity, she was backing away in terror. After a little while the sheep retreated and Celeste realised that these were actually just the same as the other fluffy things we check every day.

Like me, most of our horses were born here at Tamarisk, and have spent their lives working on our sea-side slopes overlooking Lyme Bay. Like them I have always been involved in the work of the farm. I can’t remember a time before I was riding out seeing the stock. Ask my mum and she’ll tell you I was up there from six weeks old, held securely in a sling whilst she rode Lantana. It goes back another generation; my grandmother too used horses and ponies for work both on her childhood farm and here. She reminisces about the time she and Thor raced a storm (literally) across a field, getting into the barn just before it reached them.

Having ridden my whole life, it felt so natural I didn’t realise that I wasn’t consciously familiar with the details until I tried to teach Ben how to ride. I didn’t have the ability to explain what I was feeling and doing; and I realised that informal riding does not give quite all the tricks of the trade. I’ve started taking lessons, and it has helped especially when it came to riding Tobie, who, as a thoroughbred cross is bright and fast. We’re both speed fiends, and our favourite spot is up the steep edge of Tulks Hill. The power you feel galloping up and up until you burst out onto the Ridgeway overlooking the Bride Valley, seeing all the way from Portland Bill to Beer cliffs and beyond, is breathtaking and exhilarating.

I’m making it sound idyllic;  it generally is, but not always. Getting caught in a rain storm on the top of the farm is no fun, nor is it when the fog closes in, making it hard to see the next step let alone the sheltering animals. In the winter we get strong biting winds, and squalls that blow up seemingly from nowhere, and on these days an enclosed vehicle would be an appreciated refuge. And there are other times when using a horse doesn’t make sense. Often there is another task that needs doing near the animals, and it isn’t straightforward to carry heavy tools on horseback. Ben’s electric quad-bike was bought with precisely this in mind: light on the ground, carries enough tools and environmentally friendly. However, I’ve yet to see one make a new baby quad bike or live through the year just on green grass.

Many thanks to Connie Colfox, who worked wonders on Tobie in the summer, taking her from an unpredictable and nervous horse to an attentive and responsive horse!

Also thanks to Jo Forsey at Bidlake Stables who has been helping improve my riding from comfortable and competent enough, to a more thoughtful and skillful way of moving with my horse.