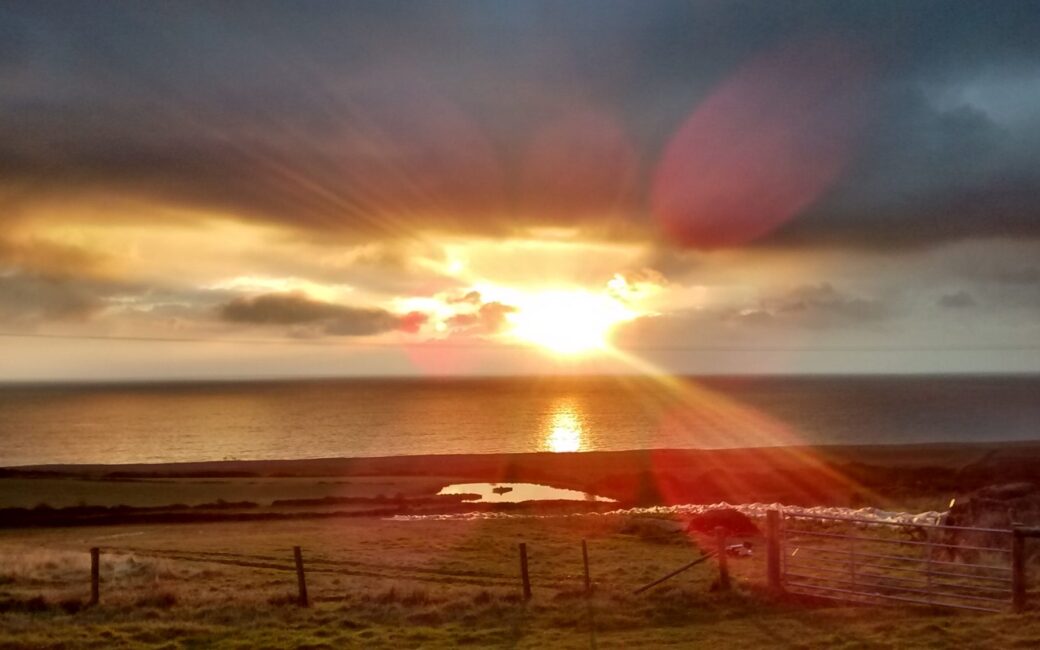 The start of the year is also the end of the year. Our animals are still outside enjoying the last of the grass. 2017 was very good for grass on Tamarisk Farm and we like the stock to stay outside with all the choice of where to go and what to eat. Most of our stock are tough native breeds and as long as they’ve enough to eat and a bit of shelter they are happy outside whatever the weather throws at them. You often see this as selling points for Devon Bulls, advertised proudly as “… overwinters at 1000ft on Exmoor”. All our sheep are breeds originating on islands or high ground. Our part of the Dorset coast has a lot in common with the islands off Scotland; it is rarely cold but often wet and windswept.

But at some stage in the Winter, most of our stock are inside for a while. Sometimes a shortage of grass sends them in: it is hard to feed hay outside when the ground is too wet to carry it by tractor and they need more than we can carry ourselves. Often the primary concern is that they will damage the sward and it will be slow to grow next year. Sometimes the wet or wind does become a problem from the animals’ point of view; if they are sheltering too much they don’t have much time to eat, and in the cosy places under the hedges their feet churn up the grass until, if they were left, they would stand in wet clay to their fetlocks. Sometimes the animals might make the footpaths too muddy for walkers. So the time comes that we bring them in, often for our need more than theirs. 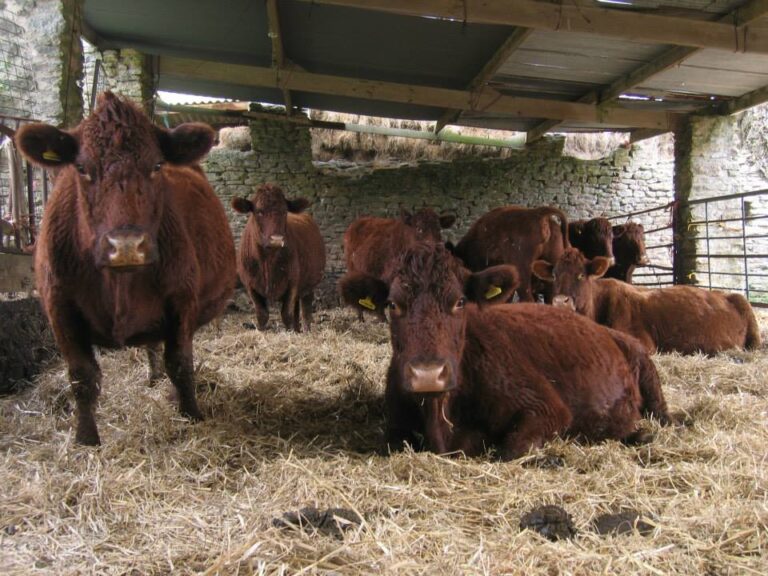 The cattle come home from Cogden along the beach. It’s a walk of about two miles and we all enjoy it, ponies, dogs and people working together. If the cattle walk on the back of the beach, they snatch mouthfuls of the sea kale, wild carrot or parsnip and sea pink as they go. If we take them over the ridge towards the sea a young one may go down to the waves and think about paddling – then run back as the foam rushes up. Where there is only shifting shingle, dumped over the path in the St Valentines day storm of 2014, they walk doggedly. It is hard work but they know they are going into the warm and dry.

It may be warm and dry but they are not enclosed; they are under a roof but there are virtually no walls to the barn. Similarly sheep in the poly tunnels are not isolated from the outside world. One might expect that the tunnels would be sealed against the weather in Winter and opened in Summer but it is the other way round. The lower part of the sides are removed to make sure the sheep don’t find it stuffy and put back on for the Summer to keep the tomatoes, peppers and beans warm. One of the pleasures of working with the animals is watching them enjoying their lives. The cycle of grazing and housing gives a lot to watch. The cattle and sheep settle in, clearly relishing their comfortable straw beds and good hay, full of sunshine and flowers, available without having to walk for it – but I know that come March or thereabouts they will be very cheerful about going out again. Sheep, as they go out reach keenly for the plainest rough green stuff before they reach the field. This is the time that they will eat dock leaves which later in the year they scorn. Older cows will get down on their knees, rubbing their heads in the soil as if to greet the outside world and calves will run great races past their mothers and back, discovering their new space. 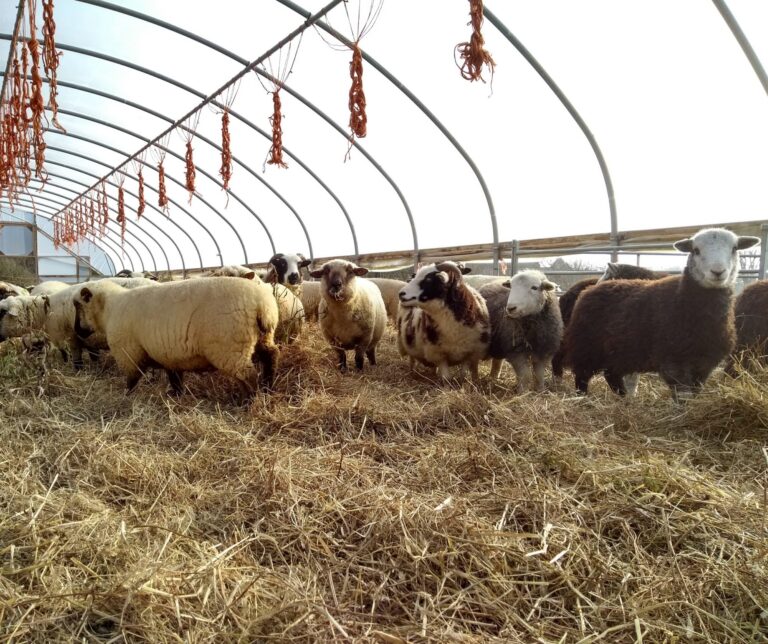 Dorset Down sheep are a breed which traditionally lived on the high chalk downlands of Dorset and were folded over the different arable crops through the winter, not coming indoors at all. This now rare breed makes up most of our flock, and though our clay drains less well than the chalklands, we sometimes do as the old flockmasters did. We watch our wheat through the winter as it grows or, if the weather is wet and we have salt winds, we watch as it scarcely keeps its head above ground. In the years when it grows fast and is ‘winter-proud’, if we also have dry conditions in the late winter, we give the sheep the chance to graze it. They get an early bite of green and the wheat has the older, senescing leaves nibbled away giving space for the new fresh leaves to grow and work. With luck, the sheep also eat or crush some of the arable weeds. We can hope for a cleaner and stronger wheat crop as well as having fed the sheep well at a hard time of year.