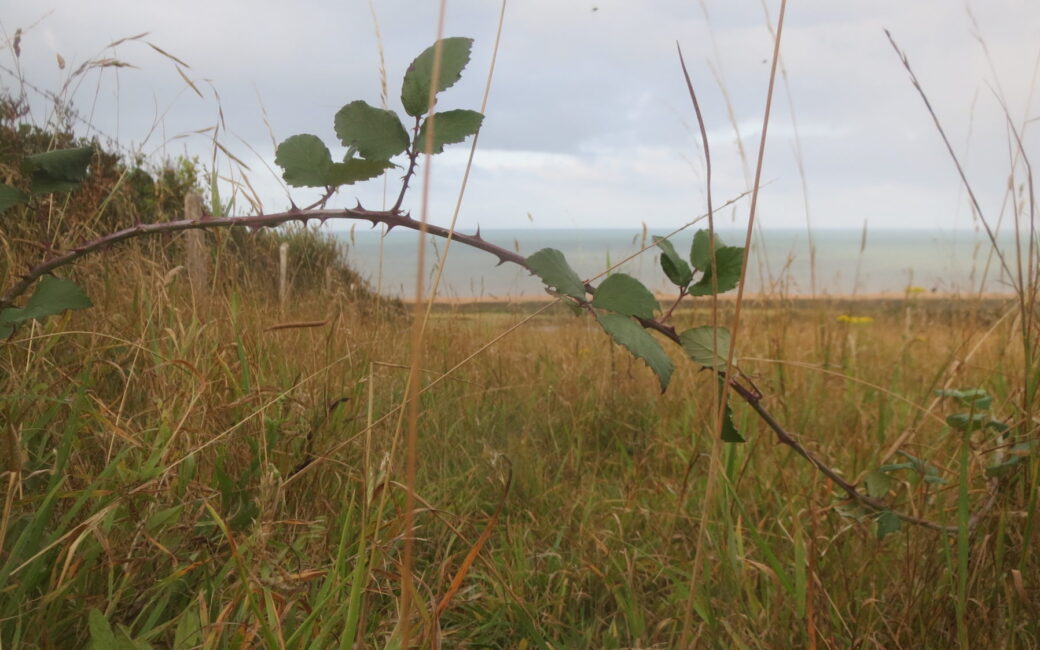 As my eyes rest from work they fall on the fields and hedges, and what is within them and around them. Sometimes this is without attention and I see not the things which are there but the patterns they form in the colours of the season. We are in September which, to me, is part of the dark green phase of the year. For now, green is ubiquitous. Green is the colour of life and growth. It is the domain of the Green Man and it defines England’s pleasant land. Soon the green will start to depart and in preparation for that is becoming muted.

The backdrop to our farm is the wide expanse of sky over our long sea horizon, with their ever-shifting palette, so for us green never becomes overpowering. When we visit inland farms I can feel weighed down by the unrelenting green of the trees, the hedges and the grass without the relief of the blues and greys of the sea.

By this time of year our grasslands are only classic grass-green if they were cut for hay back in June or July, or if animals grazed them around then. In uncropped fields, the seed heads of the grasses are now everywhere, a faded gold enhanced in some places by the last bright flowers of the fleabane and the hoary ragwort but mostly the glow is dulled by their brass and silver seedheads. The drifts of brilliant blue tufted vetch, dotted with red and black six-spot burnet moths a few weeks ago, are now light chestnut with dried stems and seed-pods, and the smaller drifts of bush vetch are black with empty pods, spiral twisted. If these fields are grazed now, even the rough-eating cattle will not manage to clear the old vegetation, choosing the fresher green which is hidden beneath it, so we will not see an emerald sward for a while. But the old culms of the grasses and brittle stems of the flowering plants will decay and contribute to the slow build of the soil. The sheep seem to try to colour-match themselves to the sward, filling their fleece with the dark green burrs of the agrimony. Trees and shrubs are dark. Bramble shoots arc through the air or snake out along the ground to escape their hedge, dark green despite being new growth, or tinged with red. Blackthorn escapes underground and brings its dark green leaves into the field in a forest of suckers.

In the arable ground, the quiet colours are following the green. The ripening cereals have now given way to the soft colour of the stubbles, dulled and greened by the many small, flowering plants growing in the wheat and barley. The bright, uniform colour of the cut stalks is diluted by the mixed colours of ephemeral plants growing beneath: there are little fluellens, grey-green leaves sneak round the stubble with purple and yellow miniature snap-dragon flowers, the sun-spurge, and dwarf spurge, cornsalad and corn parsley. There is nit-grass, a rarity of which we have plenty, the shiny flower bright back in July but looking grey now the seeds have set and dispersed. There are as well the less welcome weeds of arable ground: the bent-grass, purple-green; couch; wild oats; the dock seed-heads, russet and threatening; and creeping thistle and bristly ox-tongue, both silver-grey. However, after combining, all you see of these – unless you get onto hands and knees to see the detail – is the grey-green, smudged with the dust of the soil.

In the vegetable gardens too, the greens are muted. The outer leaves of the vegetables carry the quietness of late summer; the brilliant jewel greens and purples are now restricted to the centres of rosettes, tips of the taller plants and the new successional plantings. We know the fresh-coloured leaves are there and we pick them for you and for ourselves to eat but, as my eye casts about on the garden, it is to the outer leaves that it is drawn, with their dry, unsaturated colours, dark greens with hints of blue in some and ochre in others. If I look actively rather than let my eyes wander, I notice the origin of some softened colours: alliums may be deep orange with rust, there may be dull silver from spider-mite on a cucumber plant. The origanum flowers are fading to dusty-white and covered with honeybees. We look back to spring and early summer when whole plants show their brilliance; we look forward to autumn when the sea mists and the rain will refresh them but, in the meantime, we notice the sense of dogged persistence of the grasses and rough, tough herbs around the edges.

We rejoice in the ripening of apples; we’ve been biting through the green skin of the early eaters to their white and pink flesh since July but now we are reaching the main crop, finding the dull brown-green of the Egremont Russet with a breakthrough flush of red or gold on some of them, the greens and dark unripe reds of the cookers, stripy on the Howgate Wonder, patchy on the Bramley and Annie Elizabeth.

At another time of year I might focus on browns and reds of autumn, gold of harvest in July and August or the rainbow of early flowers and frothy white of the spring hedges and verges. But always there is green. The autumn bright green of fresh cereals germinating, the gold-green of the spring oak leaves and the red-green of the new blackthorn leaves are all brighter than the old green which surrounds us now in September. But not better for that, just different. Each belongs to its own time.