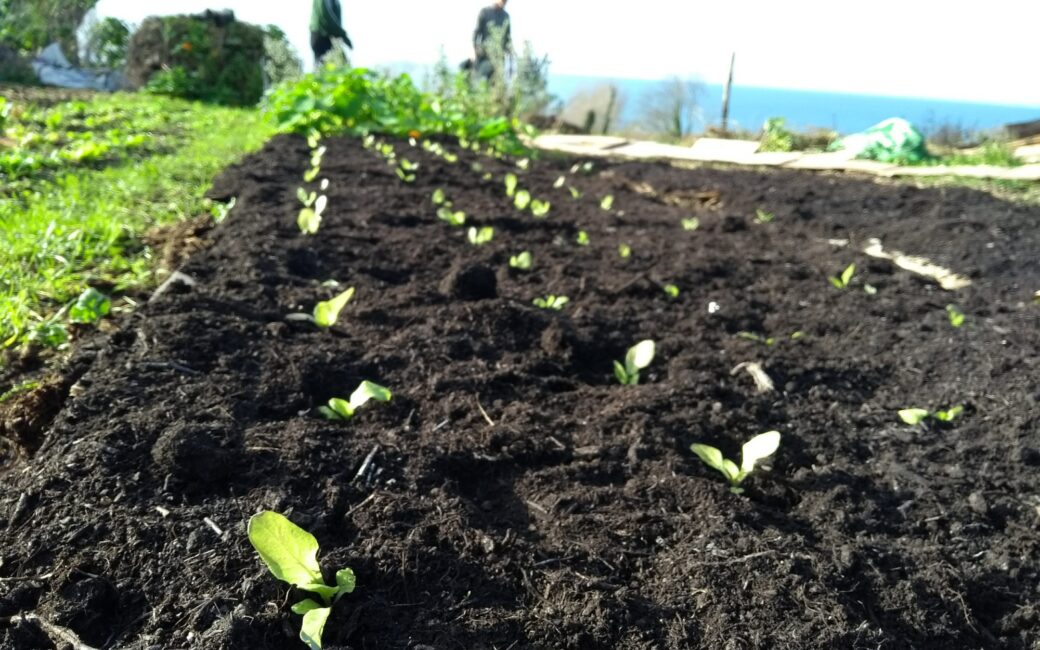 It’s May; in recent years the weather has been practically summer, and could be the best sun we get until September, but in terms of growing food, we are still in the notorious “hungry gap”. And if we were careless or unlucky we’d be at the end of our stores as well.

So what is the hungry gap, and is it still relevant to us today? It is the gap in crops between winter and summer. The time when all of the over-wintering vegetables, like leeks, kale and chard are gone, either eaten or ‘bolting’, that is, taking their first step towards setting seed, with their stem growing tall and the leaves becoming small, tough and bitter. At the same time, the majority of this season’s vegetables aren’t yet ready to harvest. It is a difficult time to grow a plentiful supply of fresh vegetables. It is also the time when stored vegetables are deteriorating seriously. There are not many varieties of squash that can last until May and the old potatoes, while still delicious, are putting out sprouts. Eat the potatoes, but not the sprouts, which are poisonous – and apparently killed people during the Irish famine.

The hungry gap feels like an anachronistic concept. Globalisation makes it easy for supermarkets to provide various vegetables throughout the year, no matter what may actually be growing in the fields outside your door. Because of this, eating seasonal food can seem like a daunting choice to make – how do you know what’s in season? Where do you buy it? Is it necessary to eat kale seven days a week? Though we are always aware of the hungry gap, we at Tamarisk Farm are also very good at managing it and have always found that the challenge of finding and cooking seasonal produce is extremely satisfying. The hungry gap becomes more a trap for the unaware and a challenge for the experienced grower than a period of deprivation.

And how do we manage? Throughout the late winter and early spring Rosie & Rebecca are busy planting and caring for hundreds of different vegetables seedlings, which they carefully nurture through any late frosts in a dedicated propagation tunnel, before hardening them off and transplanting them into the soil. But most of these plants are still consolidating their roots and leaves, and won’t start producing for a while. Polytunnels and greenhouses allow us to grow a wider variety than ever before, and greatly extend the growing season. We’re extra lucky here in West Bexington, as the warming effect of the sea keeps frost at bay, enabling us to keep crops going for longer. Salad leaves are available all year round, and sometimes more exciting crops as well. One of our growers was bemused when a restaurant she sells to initially declined to buy tomatoes in November because they only wanted seasonal vegetables on their menu, even if she was pleased that seasonality was driving the menu. We continued to eat and sell fresh tomatoes until the plants were finally taken down in December because the polytunnel was needed for it’s next job – sheltering the sheep over winter.

We feel the hungry gap on the fields as well as in the gardens. Being Organic, we didn’t put bag-nitrogen on the grass during the brief dry spell in February. This fertiliser is created at significant environmental cost and can cause significant environmental harm. Instead, our grass is responding to the soil’s natural flush of fertility which came later, as the soil dried and warmed up and it’s microbes became active again after the challenge of winter. Some years, this happens slowly. Grass is growing, but still some of our stock need more than it can offer. An old farmer once advised us to save our best quality hay for this time of year. We do, thought it still feels strange, on warm sunny days, to be feeding them hay, the product of last summer’s growth.

For ourselves, we enjoy the bonus crops that can be gleaned, by eating the small chard and spinach leaves still produced even as their stalks elongate, and delicious brassica flower heads. Curly kale gives frilly tops, Brussel sprouts give pale green tips, red cabbage and red Russian kale giving red and purple tops.

By now these have been replaced by the real thing – Purple Sprouting Broccoli, a stalwart of the hungry gap, and by other spring brassicas. The new season’s crop of spinach, chard and beetroot are in the ground, and if planted early enough (and with favourable weather conditions) may even be ready as the last of the bolted chard from the season before are removed. The real treats to look out for are over-wintered sugar snap peas and broad beans, which will start cropping in late April and May. Fresh fruit is harder to come by. Our stores of apples and pears are usually over by now, and soft fruits are still a little way off. Rhubarb, however, is prolific. Put in a crumble or stewed to a syrup to drizzle over porridge or ice cream, it’s a great way to get the fresh fruit hit at this time of year. Gooseberries come surprisingly early, at the same time as elderflower, but still feels achingly far away at present.

We’ve always preserved our summer surpluses, and that of the natural world around us, with bottles of gooseberry and elderflower jam, stewed blackberries, tomato chutneys, and more. If we’ve got more apples than tomatoes (which is most years) we make an apple purée that, when mixed with a little cider vinegar, basil and garlic, makes a wonderful tomato-esque base for pasta or pizza. In this way, we manage to keep a supply of home-grown food throughout the year, and often have some left over. It’s become a running joke in the family – what’s the oldest jar on the shelf? Just the other day I came across two jars of pickled runner beans. They were from 1998, and were still delicious.