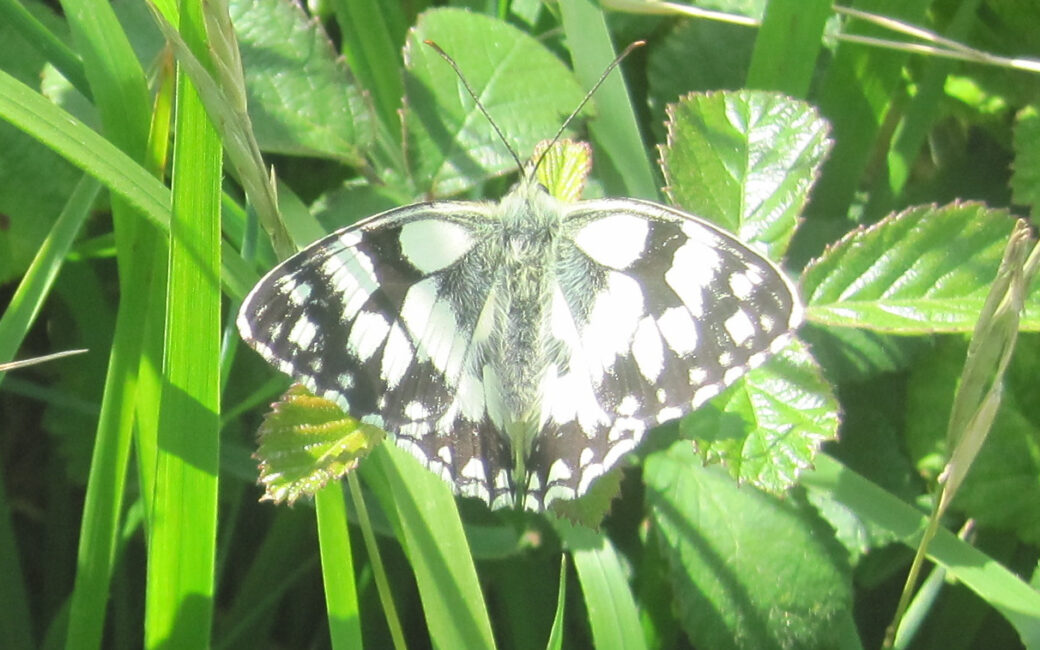 When I was a child, the only other farm in the village changed from being a mixed farm to an entirely arable farm. I don’t recall exactly when we stopped seeing the cows walking past the house for milking morning and evening and stopped seeing the milk-churns every day waiting on the solid stand of railway sleepers for collection by the milk lorry. Looking back, I can make an intelligent guess about it: I think it very likely that the farmer’s choice to stop dairying tied up with that collection of milk.

Early in the 1970s, the Milk Marketing Board changed from collecting 10-gallon aluminium milk churns, which were man-handled onto a small flat-bed lorry, to sending a tanker to the farms. Every farmer producing milk now had to put it in a bulk tank from which it could be pumped into the tanker. This tank needed to be cooled, insulated and mechanically cleaned and the farm needed to have good road access for a larger, more sophisticated vehicle. For many small farms, this would have been an enormous investment, and farmers were less keen to borrow than is usual now. It is my guess that this was when our neighbour chose to change. From then on his farm was purely arable, growing winter barley pretty continuously and exhausting the soil. This changed his life. Instead of a regular milk cheque every month he had to wait for the one crop of the year to be sold. Instead of having work every day of the year alongside the cows he loved, he had a busy autumn of cultivation and sowing and a busy summer of harvest, with a little spring fertiliser and pesticide applications to do. The pattern of the year was different.

The investment required for a bulk milk tank is just one of many factors which pushed small mixed farms to become more specialist. Another was the increase of mechanisation. A good farm worker in the 1960s would have been able to turn his hand to the whole range of tasks on a mixed farm (and it usually would have been ‘his’ – there were many women farmers sharing the skilled work and decision-making with their husbands or continuing to run the farm if he died, and earlier there were many women doing very hard menial labour – think Tess in the turnip fields – but few women were paid as skilled general farm workers). Machines, however, tend to be specific to particular tasks so, if you had many small, related enterprises on the farm, with increasing mechanisation you needed a lot of different machines and this was prohibitively expensive, especially as the drive for cheaper food demanded greater efficiency leading to more sophisticated machinery. The system of agricultural contractors helps but it does not answer fully for small farms. For example, we found that it was impossible to persuade a contractor to bring a combine to harvest only a few acres when he could be starting on a couple of hundred elsewhere, so we now have a very small, very old Claas combine which did not cost much but which needs loving care every year to keep it going.

We have never taken to the idea of specialisation because we rejoice in doing lots of different things and learning different skills. The old phrase ‘Jack of all trades and master of none’ is true to an extent but life is more interesting that way. And different enterprises support each other; the whole becomes more than the sum of its parts. So, the sheep grazing the arable land when it is growing clover, grass and other deep-rooted herbs builds the fertility and soil structure for better arable crops. The cattle and sheep, which produce the meat and the skins and the knitting yarn, graze most of the year on wildflower pastures, keeping them diverse and beautiful. The sheep and cattle housed in the winter are using straw from the corn crops as bedding and the resulting muck feeds the vegetables. The laying hens are fed from different aspects of the farm as the year goes by – last month, for example, they returned from a winter of scratching for invertebrates on the arable to scrounging the last of the goodness from old compost heaps on the market garden, with a generous helping of fresh weeds from the garden every day as well as their fermented barley, which itself is a leftover from last year.

There are downsides to having lots of different enterprises. One is that no time of year is really slack so we always feel busy. After our neighbour lost his dairy herd he was able to spend hours on the beach, fishing, which he’d struggled to find time for before. But the converse is that our work is very varied and spread through the year so it is never unmanageable. In fact, even the most repetitive jobs aren’t boring because they never go on too long. Jobs that might come up any time – cleaning or milling grain, cultivating a field, weeding vegetables – rarely last more than a day and even then are usually broken up with small jobs or interesting things to see. Take lambing, for example: we have nearly 200 ewes and they lamb over about six weeks. While we are busy during lambing, the amount of effort in each day is nowhere like that of someone who has a larger flock (say 1000 ewes) lambing over a shorter period (say 4 weeks). That is an average of around 40 per day, whereas we have days with none and days with a dozen or more. We have enough lambs to marvel at the birth, rejoice in the lambs’ competence and their play but not enough to send us demented. On top of that we have chosen to lamb in late spring, outdoors and on herb-rich native pastures, which involves less intervention than early indoor lambing plus we all have a sea view! We believe it is good for the sheep but we also know it is good for us. We do spend quite a lot of time with the ewes and lambs but never all day; never enough to lose the joy of the miracle. We may be tired and on lambing duty 24/7 but, with calves to check, early summer flowers to see, peas to drill, first broad beans to pick, we are never bored.