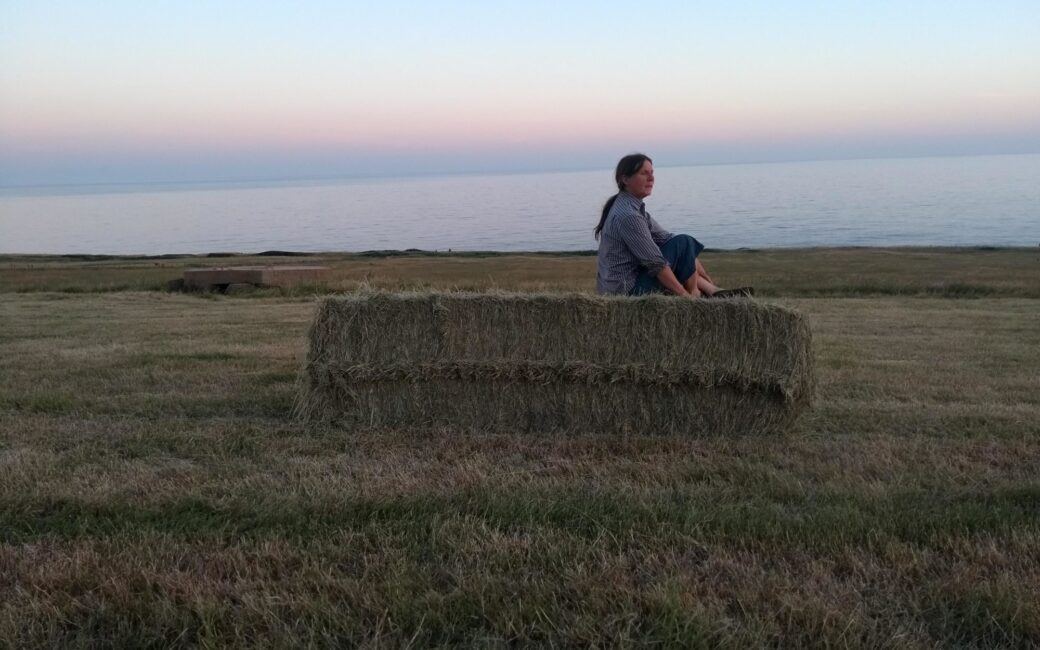 Our stock live on the grass which grows here. In the winter, there is not enough fresh grass to keep them comfortable and growing. We need to save the riches of the summer to fill the space in the winter larder. The way we save it is to sun-dry grass: we make hay.

In my memory, hay making is a time of sunshine, of sticky warmth, hard work, well-earned aching muscles, and hay fragments down my bra. Now it is different but it has the same quality of urgency and vitality and is an iconic part of the farm’s summer.

As a child I was not so aware of the days of work and decision making that led up to the final hauling home of the hay. Now I am part of it: checking over machinery; careful thought about the maturity of the grass; thinking about the trade-off between better, richer hay early in the season, of which there is unlikely to be a big bulk and the hay which comes later when the grasses and wild flowers are seeding of which there will be more but which will be poorer quality food. And then there is continuing attention to the weather forecast and watching the sky over the sea.

Finally the decision is made and the process starts. Mowing, we watch the neat swath fall and lie, full of flowers trailing behind the tractor in a neat spiral round the field. We leave the hay to dry in the swath, the old-fashioned way which protects it should there be a shower, but is a slower. So in the days following, we can still see the patterns of the cut grass as the light plays on it from different angles. Riding out on( the) horses to see the stock we also check the hay, stopping them from eating it while we jump off to smell it and see how it’s going. When at least the top half is dry and we know (as best we can) there is clear weather ahead, we turn the hay. Next,  it is lifted into windrows (rues) to be picked up by the baler.

Then, the story splits: when I was young, we made small bales, the human scaled ones. Now, most of our hay is stored as big bales. We like having some small bales: they are easier to handle in the winter and versatile, but they are time consuming to make and to move, and they are hard to store outdoors. We have little barn space and the romantic happy work of moving bales by hand is just too time-consuming. These days, we only do a few hundred that way.

The larger part of the hay harvest is made into big bales. Huge, magnificent machinery arrive and quickly make bales of around a quarter of a tonne. Using these machines mean that we need to be working on dry ground as well as with dry hay, or we risk compaction of the soil, damage to the sward and big ruts in our long term grassland – something we hate.  As always, after the baling comes the stacking, making the hay safe from rain and storm. At this scale, the strength of my muscles is irrelevant, but it does need my perseverance, coordination and skill. Moving these bales with the tractor and front-end-loader is like using giant Lego bricks. Buzzing around collecting the bales into pairs, carrying them, hitching up the trailer, hauling it to the hard standing, I am like a little worker-ant unloading and stacking again. Once stacked they are covered with three protective layers. The first keeps the rainwater out. The net and the tyres which follow are to stop our sea-gales from lifting it off. But for the hay we make into small bales, the next stage is what I recall so well; it has hardly changed. We make our own small bales with our own little baler. We worry that we will run out of time before it rains, but still we spend precious time tinkering with the adjustments to make the best possible bales.

Hay-making used to feel like endless days of summer. Nothing was more fun than hefting a bale across the field to the trailer and throwing it as high as I could. For my brothers, it was a challenge, a competition. I was so much younger that I couldn’t keep up. Instead, I moved onto the trailer and stacked the bales, where placing a bale was easier than throwing it above your head! The reality of small bale hauling now matches the memory very closely. We get out the old hay trailers, we bounce out to the field with hats, gloves, long sleeves and trousers. Stacking the bales so they don’t fall off is a skill; it is a skill which is well worth learning because it is no fun if a load collapses beneath you and you need to re-stack the whole lot. Riding home on top of the bales you feel on top of the world. Tension disappears as you rest, lying flat on your back watching the fair-weather clouds go by. Then comes stacking the bales in the barn: the stickiest, itchiest job you can imagine. My Grandmother assures me that clearing the chaff from the threshing machine was even sticker and itchier. Then we head back out for another trailer-load. If it’s coming towards the end of the evening, some of us stay in the field as the last load goes. We put up the bales we don’t think we manage to bring in. No bales will be left overnight as they fell from the baler. Lifting them into little stacks protects them from moisture in the soil and air; they dry further and are safe for later. And we go home in the summer-bright night, often with a big moon, the first stars showing and glow worms in the long grass, to a well-earned meal with the satisfaction of knowing that there is feed for the animals safely stowed for the winter.