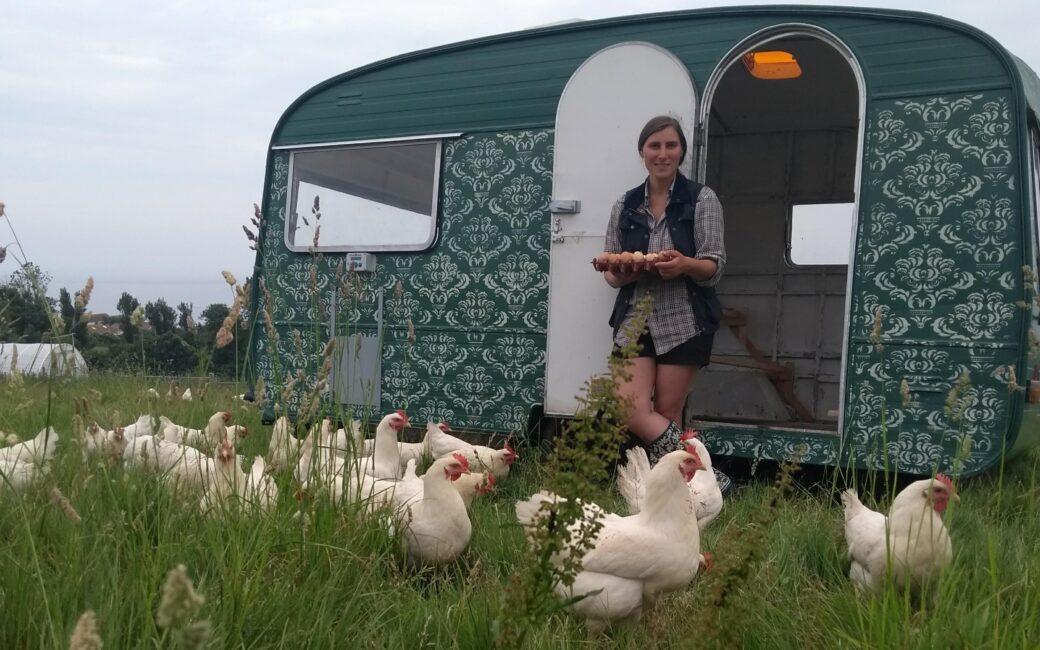 Visitors to West Bexington may have noticed a rather strange pair of caravans sitting in a field and wondered how they seem to mysteriously move around periodically. They represent my latest (bird brained?) idea: can we produce eggs without importing feed?

Sadly, it’s a topical truth that almost all the poultry and eggs we produce in Britain are dependent on imported soy to speed growth and increase output. This is largely a consequence of the banning of feeding waste animal products and needing to make up the protein shortfall by importing soy beans, usually from increasingly deforested parts of the world.

I had long wanted to add laying hens to the farm, if only because we produce an excess of grain cleanings and barley, used from time to time to help give our rams extra energy for their annual ‘services’, and sometimes to give ewes a bit of extra condition before lambing. The rest is sold to nearby farms as animal feed. Why not keep the barley ourselves and feed some pigs or chickens, we thought? Adam too had thoughts about good uses for this resource and, with his new de-husking machine, is now selling pot barley and barley flour for people to enjoy.

Well, such naive musings often lead to many trials and tribulations, and we have certainly had a few. Overall, though, it was working well enough for me to be invited to share my thoughts about our system with other farmers at the Oxford Real Farming Conference in January as part of a seminar on feeding livestock sustainably. I thought it worth sharing the ideas here, especially as they are just as relevant to anyone with a few chickens of their own.

Hens are, at heart, animals with an overwhelming desire to scratch about looking for good things to eat, especially bugs – it’s practically their raison d’être. It seemed fairly obvious that if hens could find enough of what they wanted simply by happily foraging in nature’s larder they would be able to balance their own diet, selecting from the herb-rich grassland salad bar and the all-you-can-eat-bug-buffet of the soil beneath. Sadly, truly free-range hens were never going to work in West Bexington – cars, foxes and dogs are not the friend of a wandering hen and a wandering hen is not the friend of a vegetable garden. So, we’ve managed to do the next best thing: we decided that hen houses on wheels, moved frequently with the hens safely corralled by solar-powered netting around them, would be the answer.

Leila and I managed to find two derelict caravans which we’ve repurposed and fitted out. The first became Cluckingham Palace and this year we added Hensington Palace. Caravans make excellent chicken coops provided you keep them well ventilated and they’re light enough to trundle around fields with our electric quad bike. We decided fairly early on, though, that caravans are not the prettiest things for everyone to look at, so we camouflaged them with some green paint and damask stencils. Twee you say? Kitsch? Most definitely, but we like a bit of whimsy here.

The effect on the hens of this frequent movement is amazing. You see them head down, fluffy bums in the air, obviously enjoying themselves, and the amount of grain they eat also drops each time they’re moved as they go about the business of rounding out their diet with bugs, grasses, seeds and herbs. Not everyone has large acreages and quad bikes but you can achieve much the same thing in a garden chicken pen by letting them graze your lawn occasionally and by filling their pen with all the grass clippings, wood chips, leaves and rotting wood you can give them. A hen will turn compostable waste into incredible soil and eggs as well as loving every minute they spend scratching through it. Provided you keep it aerated by using enough wood chips, leaves and fluffy material to stop it getting sodden and compacted, it will stay sweet.

The next part of upgrading our chickens’ diet was fermentation. It’s all the rage these days: kefir, kimchi, sourdough, kombucha. Well, ‘what’s sauce for the goose, is sauce for the gander’ and we are now doing it for our hens as well. There are proven scientific benefits to fermenting your chicken feed. Fermenting foods helps to make them more digestible and more vitamin-rich, as well as having a probiotic effect to ward off digestive upsets. Fermenting the small amount of grain we feed the hens is simply a matter of submerging it in cold water for a week or so. It develops a lovely soured cream smell and they relish it. Whatever grain or pellets you feed your hens, you can ferment it just the same: provided the feed is kept underwater it won’t mould or rot and should start to bubble away after a few days. You can add a bit of sourdough starter, or vinegar ‘mother’ to get the right sort of bacteria involved straight away but once it’s going just inoculate each batch with a little of the last. You should notice your hens needing perhaps 20% less feed than before, which is an added bonus.

Now I won’t lie: my hens lay slightly smaller, slightly fewer eggs than they would on commercial feed, and they use more grazing. However, no-one is clearing rainforests for them, there are zero food miles involved and the eggs have an incredible flavour and rich coloured yolks. I think the reward is worth it.