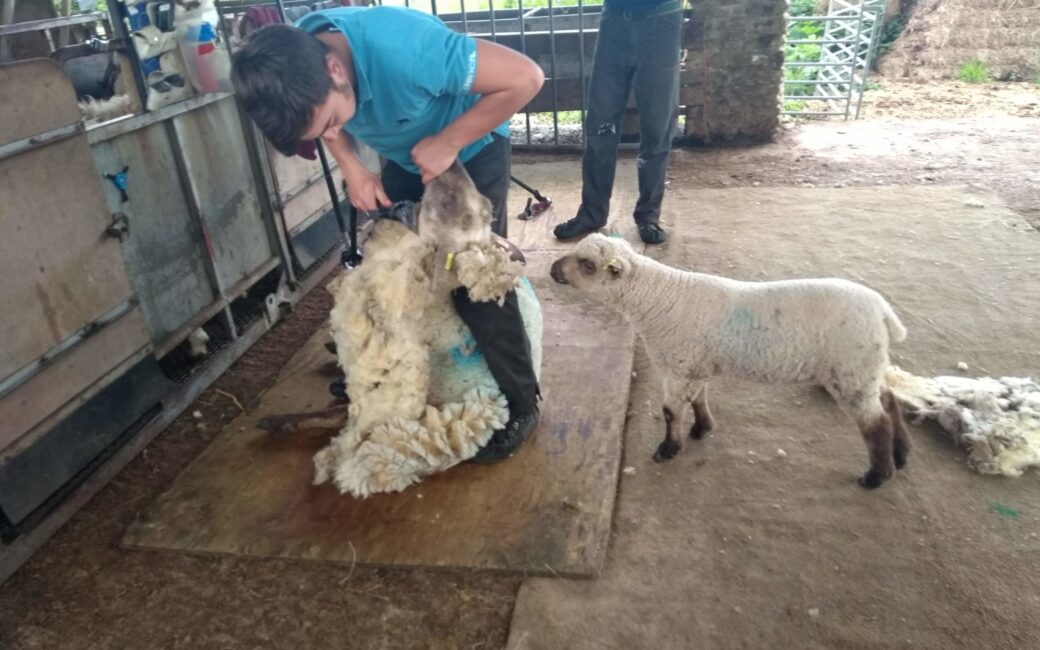 Sheep grow wool. It is perhaps the feature which defines them most for people who are not part of the farming world. We need to shear them every year, taking off their wool and leaving them cool and comfortable for the summer, and making flystrike much less likely. Wool is also a valuable product: once vital to the English economy it was eclipsed first by cotton and then by artificial fibres. More recently, society is beginning to see its value again, using it not only as an eco-friendly alternative to polyester and nylon clothing, to start reducing the pollution of the oceans, but also as a replacement for glass fibre and plastic bubble-wrap. It is used in a wide variety of forms from building insulation to packaging: we send our meat boxes out packed in wool and we have our own wool spun as knitting yarn (see Bridport Times September 2018).

We shear at the beginning of summer; if we do it too early the fleece might have grown back enough to be a problem in an Indian summer, if too late they suffer in the heat of the first part of the summer and might not have grown wool to protect them from early autumn winds. The timing of shearing is determined by the stage in the life-cycle of the sheep: shearing heavily pregnant sheep, though possible, is very heavy work for the shearers and seems hard on the ewes, already bulky and uncomfortable. Surprisingly, we have been assured that shearing in late pregnancy is not likely to make lambing more difficult or dangerous but it still doesn’t appeal to us. Like so many farm tasks, the detailed timing of shearing is determined by the weather; you can’t shear wet sheep or pack fleeces away when wet as it would spoil in storage. You cannot turn sheep, shorn almost to nudity, out into the teeth of an easterly wind. What is more significant for us, as we lamb quite late in the spring, is that it is not good to shear too soon after lambing. The ewes may be more tricky to shear soon after lambing and the lambs cannot be separated from their mothers for most of the day until they have grown up a bit. Even then, the ewes and lambs spend a lot of the day calling for each other and we arrange little gaps in the gates so that the lambs can creep through to find their mothers – if they can work out where they are in the busy movement of animals and people. On the appointed day, expecting the shearers to arrive at half past seven to start at eight, we bring the sheep into the yard early. If the weather is not to be trusted,the first batch are put under cover the night before. We separate the different breeds and colours into small pens and mark any essential information through the wool.

The shearers arrive with their specialised trailer, well-maintained shearing gear and with musculature honed by their work. Between us, we manoeuvre the trailer into position to fit with our hurdled enclosures for the sheep and hook up the electric shearing units. When everything is ready, they don traditional sheepskin shoes and some of them put on back protectors; these people may be strong but it’s hard work leaning over 60kg of ewe all day, every day for the shearing season.

It is our job to keep their trailer-pen full of sheep through the day, moving them in batch by batch so every shearer can collect a sheep immediately as and when one is needed. The actual shearing process is undignified for the ewe: she is put onto her haunches as the shearer starts to work then skilfully moved and turned so that all the wool can be reached. Though ewes need to be turned upside down in the process, the shearers are good; they know how to hold and move them in ways which are minimally stressful and don’t hurt. If the ewe relaxes, and most of them do, the fleece is taken off in one piece very neatly and quickly. The final stroke clears the last bit of wool from her rump. The ewe is released and she skedaddles away looking long-limbed and naked. The shearer kicks the fleece off the shearing platform onto our tarpaulin, reaches for another ewe, and is off again.

In the time they take to shear a sheep, we have to tidy and put away the fleece from the last one. We gather the fleece in our arms and throw it up in the air so that it falls to the tarpaulin, spread out and with the outside facing up. Crawling on hands and knees, we roughly pull off claggy bits of wool, fragments of straw from their bedding and any leaves, seeds and twigs they have brought in from the fields. Dirty and fragmented wool goes into a dumpy bag and is later composted, full of goodness for the soil in the vegetable gardens. We make sure the fleece is tidy, then fold the soft belly wool into the middle along the line of the spine and roll it up from the tail to the neck, making a neat parcel with the bright shorn ends of the cut wool on the outside. Each soft bundle is then placed in large green sacks slung on racks to keep them open. We pack the bags tightly and, when each one is full, we label it carefully and stitch it closed.

As farmers, we usually have control of our own time. We are busy every day but we determine the details of what we do and when we do it and we pause when we want to. When we are shearing, we hand control to the team who come. We cannot down tools unless they do so first: the time of any tea-break is set by the shearers. We work to serve them in the noise of the motors, the buzz of the shears, the driving music which keeps up the shearers’ pace and the shrill complaints of the lambs calling for their mothers and the ewes answering. The relief from the noise when they call for a break and turn off their machines is great but, when we sit down and pour the tea, we still have the sheep baa-ing in the background. When all are shorn and the shearers leave, we have to get the sheep back to pasture, tidy up and make sure the wool sacks are stowed safely under cover. A final tradition on the farm is a shared late supper, taken with cider we’ve made from our apples. It’s been a long day: one of our many harvests without which my year would feel incomplete.