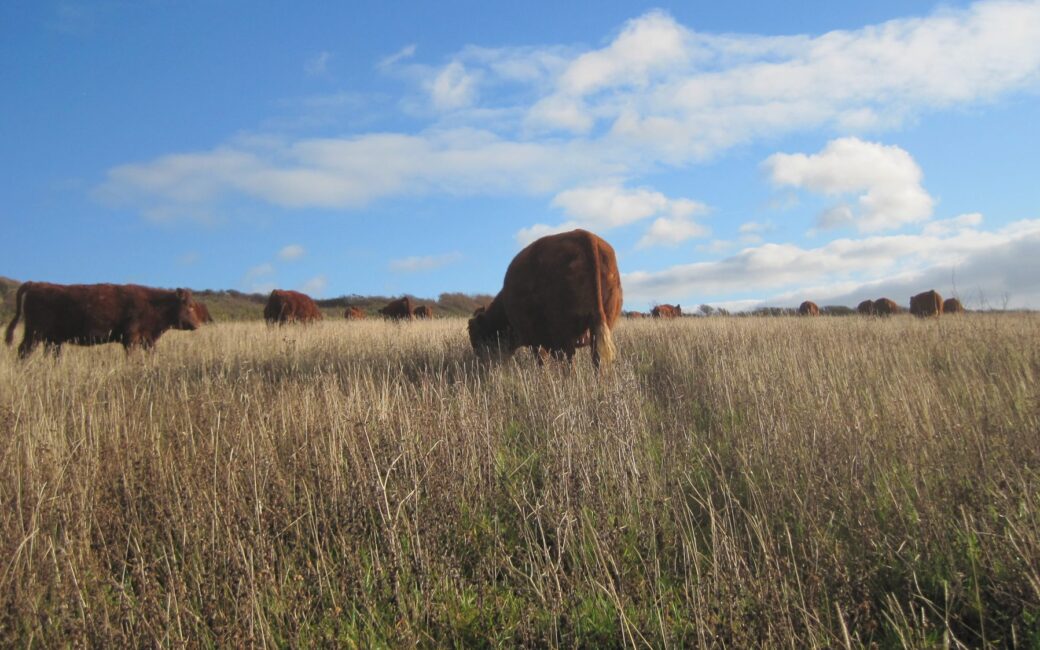 We need more Vegans in the world. Vegans are by definition, people who have thought a great deal about animal welfare and global issues that affect us all and are prepared to change their own lifestyles to help. We desperately need more people like this in the world. While we might disagree on certain priorities, we hope that more people will choose to be more selective of the food they eat.

It has been said the single greatest way the British public could contribute to fewer deaths in their life would be to give up chicken: even your largest supermarket chicken lives only 6 weeks to provide 2 kg of meat, whereas a traditional breed of cattle, out foraging on meadows and pastures provides perhaps 300 kg of meat, at the end of 3 years. So 150 times as many chickens die to provide the same amount of meat, and in lives far shorter and more squalid. But does this argument for eating beef overlook an elephant in the room? A giant methane emitting elephant perhaps?

It is fairly obvious that if the number of grazed animals in the UK has changed little in centuries, they cannot be responsible for a change in the climate. In fact grazed ruminant livestock numbers have reduced as agriculture has become more industrialised, and grain-fed poultry and pigs became cheap following World War 2. Fears over animal fats lead to the adoption of toxic trans-fats, and now the widespread use of palm oil with its own environmental consequences.

This is not to say that livestock can’t contribute to climate change, by feeding cattle on deforested land, or on crops grown with energy intensive fertilizers, pesticides and machinery. But where British ruminant animals are concerned, if they are only fed grass and hay, they require little use of fossil fuel and the pastures they use provide important wildlife habitat as part of a wilder and less tidy landscape. This is the rationale behind the practice of “conservation grazing” or more ambitious rewilding projects which use large grazing animals, but only in numbers that contribute positively to the local ecosystem.

But what about the methane? Well recent work at Oxford University has clarified how methane should be accounted for in climate policy. It’s not that we didn’t know how methane behaved in the atmosphere; the problem was how to compare fossil fuel emissions with those from livestock. A comparison that has perversely led to headlines that consuming a leg of lamb is worse for the atmosphere than a return flight to America.

The problem is how to account for the different amount of warming these gases produce, and the time they spend in the atmosphere. Methane has a warming potential greater than CO2 but it only remains in the atmosphere for around 10 years, unlike the centuries that CO2 persists for. This makes CO2 very insidious by comparison. It appears to have a lower warming potential than methane but only when looking at it in the short term.

It is perhaps best explained imagining the atmosphere of the world as a bathtub, with water flowing into and out of it. With the water in the bathtub representing greenhouse gases, an empty bath would mean we all freeze to death, and an overflowing one: runaway climate change. Methane would be the old tap the bath has always had that has been steadily flowing into the bath all the time, but is also steadily leaving the bath via the plug hole. The bath never empties or fills up; it remains balanced between water flowing in and out. Fossil fuels on the other hand are akin to pouring bags of marbles into the bath. The marbles don’t fit through the plug hole so the level of the bathtub rises. Even if we stop burning the fossil fuels (adding new marbles) the level of the bathtub is now higher than it was, and will remain so for a long time because the planet’s natural processes can’t remove the new carbon dioxide anywhere near fast enough.

The bathtub analogy isn’t perfect but the key point here is that fossil fuels are additive, CO2 is so long-lived that even if we stopped burning fossil fuels overnight the consequences would remain for centuries, methane on the other hand is removed from the atmosphere as fast as it is produced, and so it is the current number of livestock that can cause a raising or lowering of global temperature. Methane and CO2  behave completely differently, which is reflected in a new international standard for accounting for global warming potential called GWP* (replacing GWP100). Sadly this has been largely ignored because it’s both hard to explain and doesn’t make for ribald headlines about cow farts.

To summarise: the CO2 from that return flight to America will contribute to warming the climate for centuries, adding to all the fossil fuels burnt before it, filling up the “tub”, perhaps to overflowing. Whereas the leg of lamb, only warms the climate if that herd of sheep contains one more sheep than it used to. This is great news, it means we only need to keep the number of domestic ruminants from increasing. Globally ruminant livestock haven’t increased in number at anywhere near the rate that grain fed animals have, and so far increased herd sizes in the developing world have been already offset by reductions in the developed world. Go vegans! Even if we stopped eating beef overnight, the reduction in atmospheric methane would simply buy us a few years to burn more fossil fuels.

In more superstitious times it was a common religious practice in the middle-east to cast the sins of the community onto a goat, and drive it into the wilderness to die from thirst or predators, taking their sins away with it. It’s possible that future generations will look back on our current fixation with livestock methane emissions in much the same way.