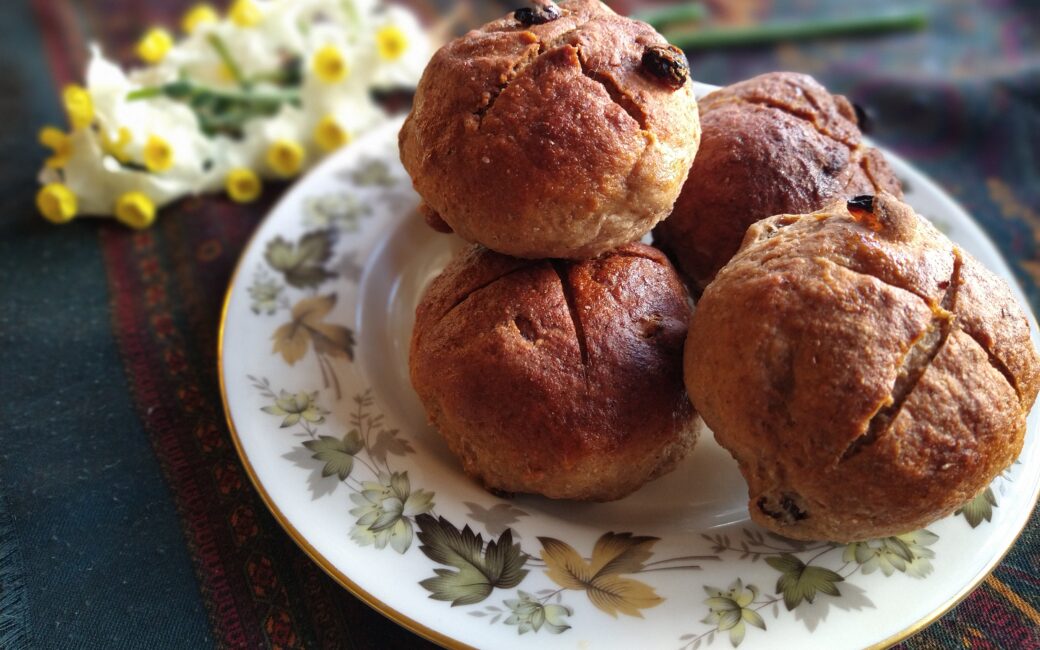 Rebecca’s hot crossed buns were an exciting treat the first time she brought them to elevenses. Since then she has made some every Easter, and each year they are still as exciting! She uses Delia Smith’s recipe as a base, with a few tweaks here and there. The main one is using our wholemeal flour instead of strong white, which produces a less fluffy bun but packed with flavour.

Place the dried fruit in a small bowl of water to soften; this prevents them from pulling moisture from the dough whilst cooking.

Measure the flour into a bowl and add all the dry ingredients. Add the currants and candied peel and stir until evenly distributed, then make a well in the bottom.

Place the softened butter into the well and pour the warm milk and water over it, then add the egg. If you sieved out bran, add the butter and milk, reserving the water until later. Using a fork, start to combine the ingredients into the middle of the well, changing to a spatula and then your hands as the consistency of the dough starts to change. If it needs some more liquid, add the water slowly now. When everything is combined nicely and kneaded, cover with a tea towel and leave in a warm place for 1-2hrs until it has doubled in size.

Tip the dough out of the bowl onto a clean surface and punch the air out. Using a knife, divide the dough into twelve portions. Take each piece in turn and shape it into a ball, and place them onto a greased baking tray. Leave space between each ball as they will increase in size as they rise.

Cover the baking tray again and put aside into a warm place for 45-60mins, again looking for a doubling in size of the dough.

Take this time to make the glaze. Place the sugar in a saucepan and add the water. Bring the pan to a gentle heat and stir until the sugar is all dissolved, creating a clear syrup.

Once cooked, place the buns on a wire rack to cool and brush the tops with the glaze.

Serve sliced in half and toasted, with a good helping of butter.