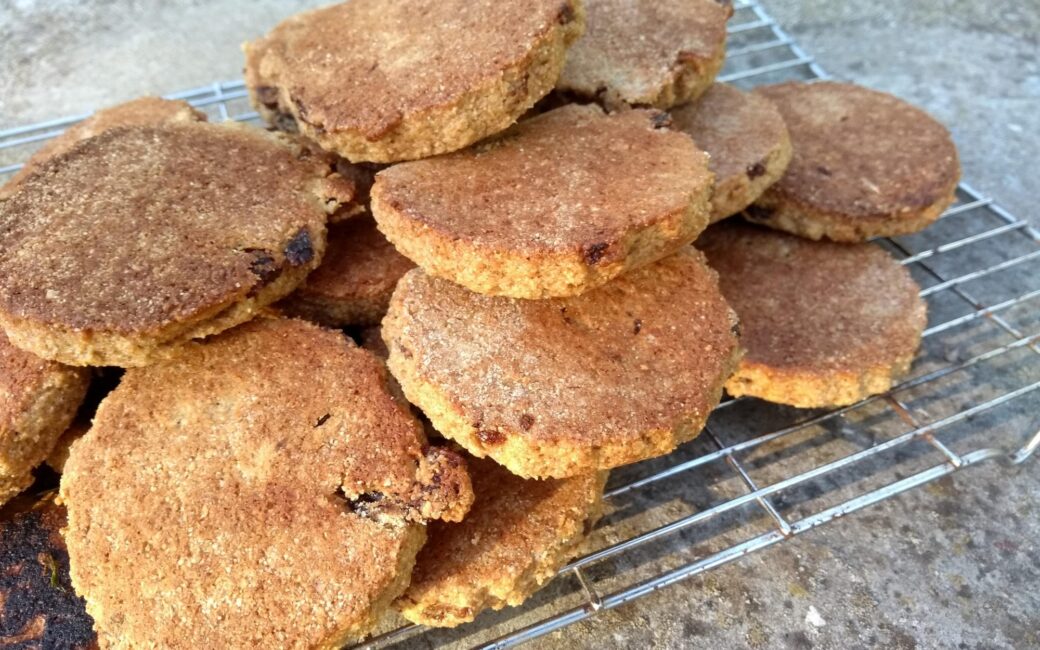 Biscuits are a great snack to have around the farm, for that hit of quick sugar energy, and slower release carbohydrates and fat. These Welsh Cakes definitely hit the spot in the middle of a tough job, or with a cup of tea afterwards.

Tip the flour, sugar, spices, baking powder and a pinch of salt and pepper into a bowl. Mix together thorougly. Cut the butter and lard into small blocks and add to the dry ingredients. Using your fingers, rub in the butter and lard until crumbly. Mix in the dried fruit, then work the egg into the mixture until you have soft dough, adding a splash of milk if it seems a little dry – it should be the same consistency as shortcrust pastry.

Roll out the dough on a lightly floured work surface to the thickness of your little finger. I cut out small rounds of 3cm, because biscuits get eaten by number not size in my house! Re-roll any trimmings until all of the dough is used up. Grease a flat cast-iron pan or heavy frying pan with butter or lard, and place over a medium heat. Cook the Welsh cakes in batches, for about 3 mins each side, until golden brown, crisp and cooked through. I have successfully cooked them in the oven, but it’s harder to get them soft inside and crisp on the outside.

These are delicious served warm with butter and jam, or just sprinkle them with icing sugar. Keep in an airtight tin to stay fresh for a week, but hidden if you want them to last!